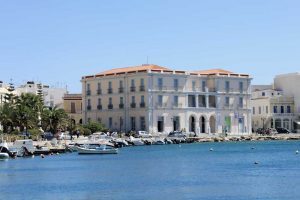 The aim of Open Horizons is to introduce the Greek public to the works of three established Canadian artists—Ron Moppett, Allyson Glenn, and Colleen Heslin. The exhibition is a celebration of the 150th anniversary of Canadian Confederation (1867–2017) and of the Canadian Embassy’s presence in Greece for the last 75 years.

All three artists are at the forefront of Canada’s artistic community. They push forward the taken-for-granted boundaries and hierarchies of art, a fact that is evident in the reception of their much-awarded practices. In visually innovative ways they speak of and depict the physical vastness of the Canadian landscape. They favour covering the canvas, at times extending the works onto the floor, creating powerful installation works that tell stories of a world in a state of flux; works that can withstand and stand up to the challenges of the Aegean Sea—endless blue horizon, relentless light, and above all, myriad stories, which are buried in its depths and washed up on its shores. 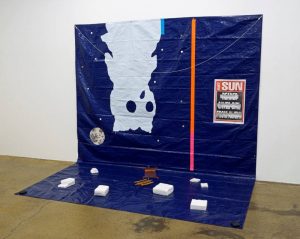 Ron Moppett has an uncanny ability to assemble bold colours and a variety of materials and objects (some of high and pop culture, some he has collected over the years) into paintings and installations that both invite and challenge viewers. His thematic cues are culled from his personal history and travels, art history, and current events. Over the years, Ron has demonstrated his penchant for exploring differences through his use of space—differences between interior and exterior, shelter and refuge; differences that are at the forefront of Greek culture.

Images courtesy of the artist and the Trepanier Baer Gallery. 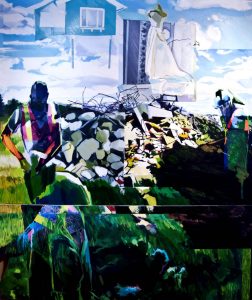 Allyson Glenn is equally bold in her choice of colours, strong brushwork, and thick and quick application of paint and sensitivity, with a sharp eye for environmental mishaps. She makes figurative painting timely once more, and a joy to behold. She builds on the long tradition of landscape art that features the prairies with a contemporary twist; and although she depicts landscapes in ruins, when looking at her works, viewers experience moments of extraordinary beauty that prompt insights into current ecological crises.

Images courtesy of the artist 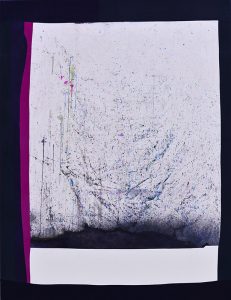 Colleen Heslin has turned painting traditions on their heads. Her abstract works appear as if painted but are made of canvas used as a backdrop that she has dyed, rinsed, stained, sewed, and stretched to mesmerizing results. These new pieces play tricks on our ways of seeing and thinking about painting’s history. Within the borders of her canvases, she combines spaces, colours, and forms to release an infinite number of narratives on labour and aesthetics.

Images courtesy of the artist and Monte Clark Gallery

Both Canada and Greece became nations during the nineteenth century; both retrieved from their pasts the “heroic” in peoples and national landscapes; both imported notions of art and its institutions from Western Europe. In both countries, painting and sculpture contributed widely to the formation of the modern idea of nationhood, and since the nineteenth century, both countries have had parallel experiences in trying to figure out the “Canadianess” and “Greekness” of their respective art and artists. In the context of 2017 celebrations, it is counterproductive to continue looking for the purely heroic and national; it only intensifies the global exclusionary practices we witness daily, practices that have brought us to the social, political, and economic turmoil that has impacted everyday life across the globe during the last decade. At the present historical junction, art that explores current issues through personal stories may become the common ground, the basis for productive cultural exchanges between Canadian artists and art audiences in Greece.

Tinos is the island that gave Greece its “fathers” of painting and sculpture. Its history goes as far back as Neolithic times and has been associated with Poseidon, the god of the sea, and Aeolus, the god of the winds, Demeter and Dionysus too. The Venetians invaded Tinos in 1207, and since then, Tiniots have been marble carvers, employed in Western Europe for centuries to work on the architecture of public buildings. Because of this, they have had wealth and access to travel abroad. Tiniot painters and sculptors played important roles as teachers in Munich, Germany, Paris, and eventually Greece, after its emancipation from the Ottomans. Here, they played an important role in establishing the Athens School of Fine Arts. Well-known Tiniot artists include the painters Nikolaos Gyzis and Nikiforos Lytras and the sculptor Yiannoulis Halepas. The Archaeological Museum of Tinos, the Museum of Marble Crafts, the Museum of Tiniot Artists in the courtyard of the Megalochari Cathedral, and the Costas Tsoclis Museum are all located in Tinos.

The Cultural Foundation of Tinos was established (2002) to promote Tiniot artists. It houses the works of Yiannoulis Halepas (a permanent collection) as well as a gallery that hosts national and international rotating exhibits, especially in the summer, when Tinos becomes the meeting place for Greece’s intelligentsia. Tinos has been the favourite vacation spot of philosopher Cornelius Castoriadis and novelist Vassilis Alexakis, to name only a couple of the famous intellectuals and artists who favour Tinos as a summer destination. In August, the Cultural Foundation organizes the Tinos Jazz Festival and the Tinos World Music Festival.

Neither Canadian artists nor Dr. Caterina Pizanias are strangers to the folks at the Cultural Foundation of Tinos and its public. Back in 2004, another special year for Greece, during the Cultural Olympiad, Caterina curated for the then Triangle Gallery for the Arts ( now Calgary Contemporary ) seven Alberta sculptors and two local artists in the exhibition titled “Migrations in the Third Dimension: Tradition and Innovation in Canada and the Cyclades.”

Thanks to our Open Horizons sponsors 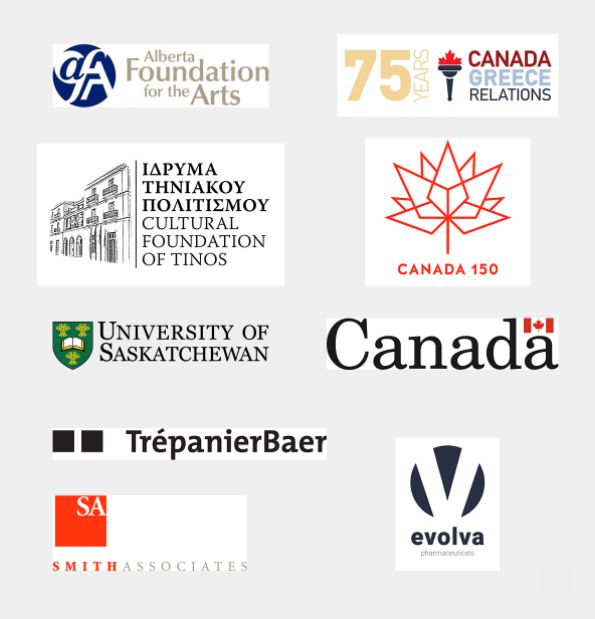 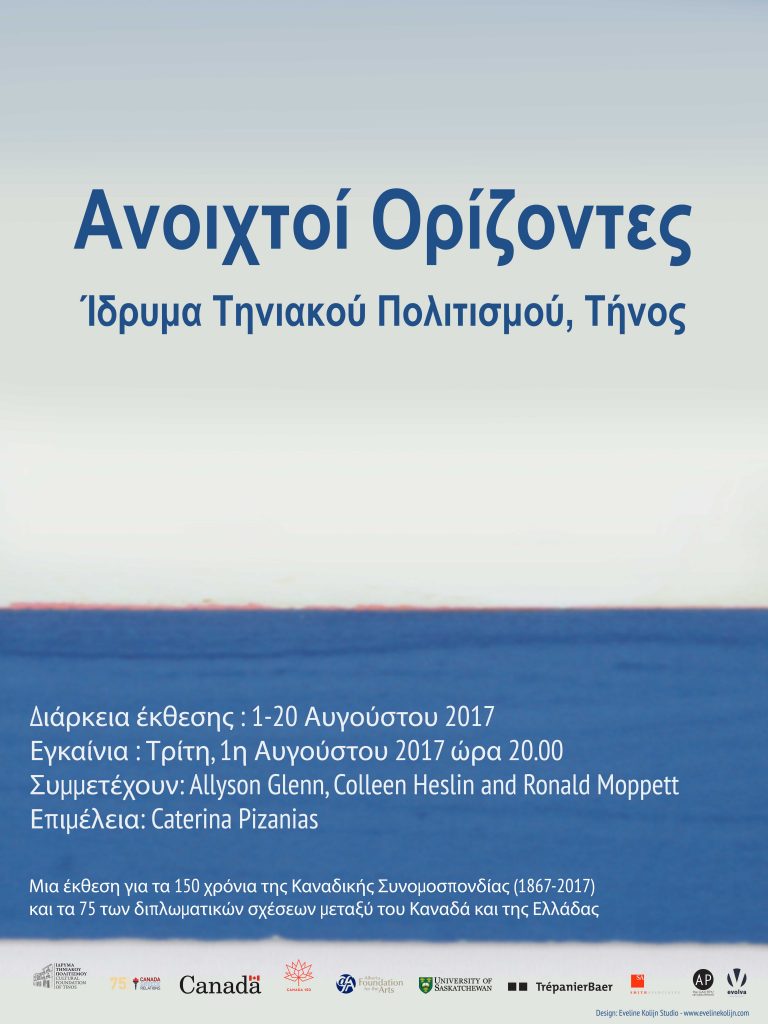